Why I Chose Dentimax as My First Sponsor 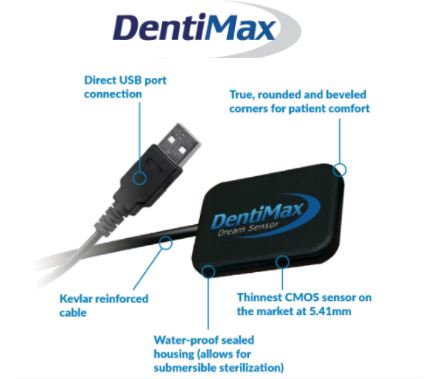 ****If you buy a Dentimax Sensor or Software – Mention my name and Practice Biopsy — you might get a discount or better deal.****

My story with DentiMax goes back….it goes way back….it goes back to when I was still in dental school putting together my master plan to open my dental practice. As those who follow me know I had already applied for my start-up loan while I was still in Dental School.  Which means I had a LOT of motivation and NOT a lot of money.  Digital Sensors are one of the biggest financial investments that a new owner dentist will make with each sensor at that time typically costing anywhere between $7,000 to $10,000 a piece.

For a new grad looking to start a highly profitable dental practice on a shoestring budget – that wasn’t going to fly.  So I started to look into other options.

I looked into maybe not having sensors at all – Phosphor plates were always an option…but when you factor in purchasing the processor AND all of the TIME lost by developing the plates, it was an absolute ‘no.’

I considered only buying one sensor and making do with that.  But…if I had only one sensor (Adult size), there would simply be children I could not take radiographs for due to mouth size.  And also, if something ever did happen to my sensor like somebody dropping it, stepping on it, and crunch – then I would be sensorless completely until I could get a new one.  It’s smart to have a back up.

So I definitely needed two.

So I continued to shop around.  My days as a 4th year dental student included scrounging around the internet looking for deals on sensors, dental chairs, digital panoramics, vacuums, compressors and everything I was going to need.  I also continued to dig around for strategies to keep my budget as low as possible, while still maintaining the quality necessary to deliver the type of predictably good care I wanted to deliver to my future patients.

At some point I came across an article about a guy named David Arnett who opened a dental practice for only $30,000.  Not $300,000 — $30,000.  How on earth was that possible? As I read the details of the article, old misconceptions melted away. I read the stories and I read the numbers and it all made sense.  This David guy and I were on the same page!  Along the way in dental school we get indoctrinated to think we have to spend half a million dollars or even up to a million dollars to open a dental office.  And here is a person not even a dentist who opened an office and staffed it with a dentist for only $30,000 up front.  Hmmm, but the guy was not a dentist…the guy owns a sensor company…and the guy is selling a sensor called the Dentimax Dream Sensor for WAY CHEAPER than other sensors in the market. Maybe it’s too good to be true and these sensors aren’t even good. I remembered the name Dentimax in the back of my head.

Time went on and I started working an associate dentist job as my start-up practice was being built.  During my orientation at the job, when we got to the x-ray sensors, that name popped up again Dentimax. I honestly had only ever heard the name of that business twice. In the article I read — and working in that practice.  Prior I only knew the big names: The Dexis, the Sirona Schick, and so on.  The big name sensors that came with a big reputation and with a big price.  But here was Dentimax yet again.

Well, now was the time to try things out and see if these more affordable digital sensors are really all that they claim to be: Cheaper and thinner than the competition with all of the same quality.  I send my assistant in to take a full-mouth series and then plop down at the computer to take a look at the results.  Enamel, dentin, pulp, cavity here, perio there and my dentist eyes can see everything I need to see, and can see it well!

Like most dentists, I didn’t know the difference between real resolution and theoretical resolution. I didn’t know what ‘scintillator’ meant or what a TWAIN driver was. All I knew was that these images were just as good as the radiographs I spent hours and hours pouring over in dental school.  Just as good as the images I’d seen my colleagues post in social media groups online.  Just as good as the images I had seen in demonstrations given to me by reps selling Dexis and Schick.  And that this sensor WAS a game changingly thinner sensor and it WAS game-changingly cheaper than the competition.  For someone trying to start a lean and mean practice….this was THE ‘lean’ sensor.  Both physically (thinner size) and financially (lower price).

Good old David Arnett, who opened a dental practice for $30,000, with the belief that dentist’s tend to overspend on the business side, had put his money where his mouth was, and created a truly affordable and quality sensor system.  I was a highly satisfied user of the Dentimax Dream Sensor for my entire duration at my associate job, and now multiple years into my start-up practice I am still a happy user of the Dentimax Dream Sensors or as I call it to my colleagues – the Lean Sensor.

Today, I own two of them. One adult size and one pedo size and have never had a single complaint or problem with the product.  Just predictable and results.

So when Dentimax and I connected for potentially being the first sponsor of Practice Biopsy – it was a no brainer.  David Arnett and Dentimax understand the principles and value of lean efficiency in dental practice management and both strive to accomplish a similar mission of helping dentists succeed.

Check them out for yourself: https://dentimax.com/

Or email the owner, David Arnett, directly at: david@dentimax.com

Below you will see my invoice from when I bought the sensors in late 2017. Similar quotes from other sensor dealers at that time were at times upwards of $20,000 for two sensors and necessary software. The same was accomplished with Dentimax for just over $8,000. 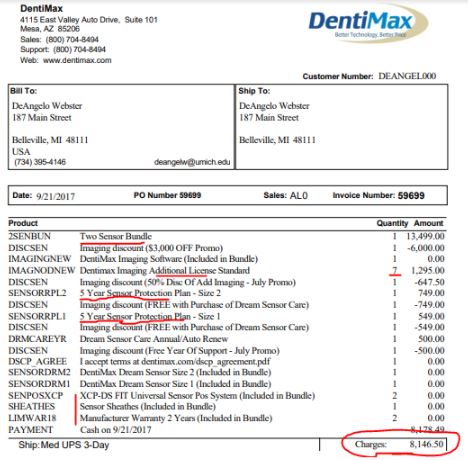 Kaizen…Let’s all get a little bit better, each day.