Why I Quit My Corporate Dental Job After Only 3 Days 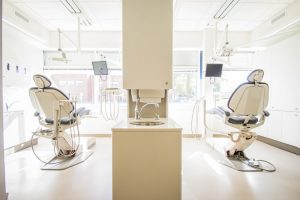 I suppose before I delve into why I quit my job at a corporate dental office after only 3 days, I should begin with why and how I ended up working there in the first place.  My initial proclamation was that I was going to open my own practice as soon as possible; my inclinations lay in the business aspect of dentistry.  Some students have a passion for cleaning out infected canals – they specialize to become endodontists.  Some students have a passion for the grafting and cleansing of gingival tissue – they become periodontists.  I have a passion for understanding and dissecting efficient business systems – I was going to ‘specialize’ in the business of dentistry.

My start-up was already underway in the construction and design phases, but I would need a job for the ensuing year to carry me over until I was ready to start seeing patients in my own office.

So naturally, corporate dentistry seemed to me – a great place to get started learning.

I knew that corporate dentistry was renowned for being brutally efficient within the dentistry industry.  So profitable that they could pay dentists a full-time salary and still have hundreds of thousands (per practice) left over at the end of the year to kick up to the corporate owner’s in their business suits.  If I wanted to learn to build a viable economic dentistry machine — corporate seemed like a great start.

So, I took a job in a small corporate set-up.  I won’t give the name – never will.  I will say it was not a giant like Aspen.  It was a smaller cohesion of 12 or so practices owned by 2 dentists.

My 3 days working in the practice were so miserable, that I quit, without notice – and without any future job lined up.  I was happier being unemployed, than I was working in that practice a day longer.

Prior to Day 1, was was relocated between practices.  I was initially under the assumption that I would be working in a practice approximately 20 minutes from my home.  After signing my employment contract, I was informed that I was going to be relocated to work in an office that was an hour and 15 minute commute in clear traffic.  2 hours during rush hour.  There was no negotiation in this point.  It was an order.

Here Are My First 3 Days as a Practicing Dentist

Day 1 I showed up to work at 8am to work until 5pm.  In actuality, I was mandated to stay until 11:30PM that night, the lead doctor told me he stayed until past 1AM.  When I asked one of the assistants if this was normal – she said ‘Absolutely! I’ve been here as late as 3AM before.”  The goal seemed to be to keep all of the patients in the chair – at any cost – until all of their dental work was done.  Even if this meant buying them dinner to get them to stay.

There were no patients on my schedule in my doctor column.  I was told that, for a while, there would not be. And I should be okay with that.  I would treat the walk-in patients, and provide the care that the lead dentist did not have time to do.  During my first restorative procedure — I realized that Etch was not stocked in this office: Waste of money, time, and just makes patient’s teeth sensitive.  I also realized that rubber dams were not routinely used in Endo, because ‘ you don’t really need one.’  I also realized that there was only one bur for restorative preps.  Not my ideal working conditions.

Anybody who knows my personality type, should quickly understand how off put I feel like the quality of my work is being diminished because of the arbitrary whim of a ‘boss.’  I won my classes’ “Operative Dental Award.”  So I kinda know what I’m doing clinically, right?

During that first day of work — the office production between myself and hygiene was approximately $23,000.  I was paid a flat rate of $500 for the day as an independent contractor.  My personal production, if I recall, was just over $7,000. Yielding me a net pay of roughly 7% production, pre-tax.  I went home exhausted and depressed. Not with them, but with myself, I realized that I had made a poor choice. Maybe tomorrow would be better.

Day 2. Still no patients on my schedule.  But still lots of work for me to do.  I because to understand the system.  The lead doctor would treatment plan the patient and then move the patient over to my chair to do the work.  No questions asked.  Zero autonomy in treatment provided.  Boss treatment plans, and you sit there and drill that tooth on this patient you have never met before and have zero rapport with.  Lovely.

The lead doctor was out today, so today it was myself and the “2nd in Command Doc” of the office.

At a certain point during the day, a molar endo case ended up in my chair.  I did not feel comfortable with the case.  I told the lead doc in the office that I did not feel comfortable with the case and felt it should go to a specialist or perhaps he himself could do it.  Not an option.  I was told to do my best, and that I would have guidance from the supervising doc during the procedure.  As stated earlier, rubber dams were not routinely used in endo. But the research is clear clinical results are compromised without one. An assistant was able to dig up an old box of rubber dams (never opened) — there were no clamps and no hole punches.  So I poked my own hole and used floss to secure.

Long story short, molar endo, 2nd molar (#18) , severely dilacerated roots, anxious patient, and unable to negotiate the canals at all.  As expected -the case was above my experience level.  I was ready to punt to a more experienced doctor – as we are all taught to do.  It was not an option. The patient was made to sit in the chair for roughly 6 hours before I was allowed to temporize and dismiss the patient.  Still no referral to a specialist was allowed.  The patient was scheduled to return to this office.  I would never see the patient again, and can only hope a satisfactory outcome was obtained.

On my drive home I called the leading doctor; to discuss how I felt about the day. (Recall, I was with ‘2nd in Command Doc’ today — the lead doc was out).  Today we got out during rush hour — so I had a hefty 2-hour drive home and $500 in my pocket from the days pay. I told him I was pressured into doing a procedure I was not comfortable with; and queried what the protocol should have been.  I will never forget his response; to paraphrase:

“Dr. Webster, do you know where I am today?  I’m in Florida.  Surrounded by successful people.  Don’t you want to be successful too?  Then you are going to have to learn to be a lot more like me.”

He went on to describe me as someone who had a lot of potential, but obviously was an incompetent person overall.

No patients in my doctor column again on the schedule.  Typical at this point.  I wandered the halls of the practice, flipping through images on my phone of the flooplan for my start-up.

Sure, let’s have a look.

“So, we have a new patient who needs Endo done on #18.  The roots are dilacerated.”

Same tooth as yesterday.  Same sub-par equipment in the office. My same lack of confidence to do the procedure at a quality level.  Same desire to refer it out.  I looked the guy right in the eyes and told him, “You can refer this out, or you can do it, but I’m not touching that tooth.”  I decided at that moment I was done working there.  I finished out the day.

That evening I emailed a letter of resignation to both the Lead Doc and the Owner Doc of the corporation.  Then I called the Lead Doc on the phone and told him I was quitting. My contract stated I had to give a 60 day notice to quit.  I told him I would honor the 60 day notice — but that I did not want to.  They told me not to come back.