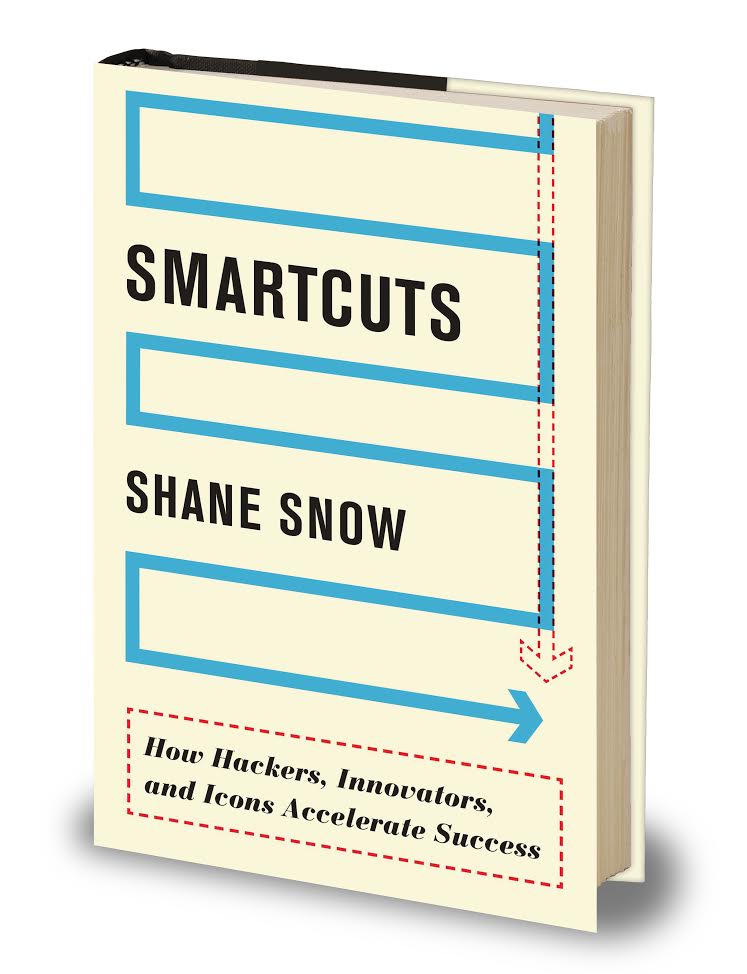 SmartCuts by Shane Snow was a book I was very excited to read.  The title is obviously a play on ‘short cuts,’ in this case it is a ‘smart cut’ because we will be learning how to get ahead in life by being ‘smart.’ Essentially this book delves into what it truly means to work smarter, not harder.  That is a phrase that colloquially gets thrown around quite often, however this book actually explores the details of what exactly that means.  The book gives examples of individuals who have had accelerated rises to success in many different career avenues and industries .  Once the examples are given, the author attempts to break down their success pathway into the fundamental pieces and identify the short cuts the person was able to exploit in order to achieve success faster than their average cohort.  In these explorations we learn how to identify similar shortcuts and opportunities to take the ‘smart way’ in our own lives and careers.

Snow argues: Accelerating achievements can be said to be analogous to cheat codes and shortcuts in videogames such as the Warp Pipes in Super Mario.  These smart shortcuts, which Snow calls Smartcuts, allow an individual to circumnavigate much of the trial and toil of others attempting – and often failing – to climb the ladder of success.  It took John D Rockefeller 46 years to make a billion dollars, it took Bill Gates 12 years, and Mark Zuckerberg even less.

Despite leaps in what we can do, most of us still follow comfortable, pre-prescribed paths. We work hard, but hardly question whether we’re working smart. On the other hand, some among us manage to build eBay in the time it takes the rest of us to build a house.” – Shane Snow

An anecdotal story provided by the author is as follows: 3 people are standing outside in a rainstorm as you drive by in a car with only 2 seats.  Who do you save from the storm? 1) A frail old woman? 2) A best friend who has saved your life in the past 3) A love interest you have been seeking to get closer to?

Conventional thinking leads to believing you must choose one. Snow suggests that the ‘correct answer’ is to give your keys to your friend, let him drive the old woman to safety, and stay with your love interest waiting with him/her for a taxi/bus/Uber. The point is not that this is the ‘correct’ answer, but to think outside of traditional conventions and not to impose limited boundaries on your thinking.

I will now go on to break down the book into several categories.

One of the smartest ways to short cut your way to success is what Snow describes as a ‘lateral ladder switch’.  This is opposed to attempting to ‘climb the ladder of success to the top.’  Snow reviews previous Presidents of the United States and we find that historically, you don’t often become the president of the United States by taking the straight path of Governor to Senator to President, etc.  But rather, historically, “The presidents, for the most part, got to high office by not playing the game everyone else plays.”  Relating this to current events, the non-traditional victory of Donald Trump over the traditional candidate Hillary Clinton.  The principle premise of this is to leverage your skills and reputation from an outside field you have thrived in, to insert yourself into a higher position of authority in a new field. To reflect on the example of Trump – what he lacked in political skill and experience, he made up for by making a lateral switching and using his media manipulation skills in order to surpass the traditional ladder climbing Clinton.  The rest is history.

In this section of the book, Snow delves deeper into how exactly we can do this for ourselves with several poignant examples.

Research from Brunel University shows that chess students who trained with coaches increased on average 168 points in their national ratings versus those who didn’t.” – Shane Snow

The shortcoming in mentorship, Snow argues, is in the hand-off of knowledge.  We learn that approximately 70% of family businesses fail when passed to the 2nd Generation – despite having the ‘ultimate mentor’ of a parent.  If the knowledge is not systematically transferred – it will not be effective and long lasting.  We must learn how to select the proper mentors, or we risk wasting time. The idea of failure is also highlighted in a very important way.

It is a misconception that when we fail, we will be better next time. Many people fail at things – and don’t ever go on to become amazing at such things. We view a study which examined surgeons performing  traditional coronary artery bypass grafting. In the 90’s they developed a new technique, which would not require stopping the heart. However, the physicians were struggling to adapt and learn the new procedure.

The surgeons which experienced the most improvement where the surgeons who watched other surgeons fail, and were able to learn from their mistakes.  Watching the failure, allowed the observer to see the wrong way and then learn how to correct.  Surgeons who only watched successful surgeries did not deeply learn how to solve non-ideal situations as well.  Surgeons who performed the surgery themselves and failed, were too personally invested in the failure to take a step make and analytically learn from it. Essentially – being able to externalize your mistakes, is the best way to learn from your mistakes. Whether it is your mistake or someone else’s – you need to view the mistake objectively and then course correct. That is how we improve the most quickly.

Experts have been shown to vastly prefer negative feedback compared to positive feedback.  That type of feedback spurs the most improvement as ‘criticism is more actionable than compliments.’ Novices take the feedback personally, need encouragement, fear failure, and this hinders their ability to improve.

By leveraging tools, we are able to get much more done as opposed to tackling a challenge or goal with brute force.  This section of the book made me think of the classic story of John Henry versus the Steam Engine.  This was not an allegory told in the book, but it would have fit in very well. (For those not familiar, the story tells of a man, John Henry, who was certain he could outwork a steam engine digging a hole into the side of a mountain – himself using only hand tools.  John Henry managed to ‘out work’ the machine and in doing so died in the process from exhaustion.)

Hard work is necessary, but diligence alone will not lead to great success.  Some of the hardest working people in the world – are not significantly rewarded in either financial or lifestyle quality measures.  Those who are best able to leverage their abilities and opportunities in the end thrive with much greater results.

Finland consistently ranks at the top of math, science, and reading tests; however they enter school 1 year later than most countries, take fewer classes, spend less time in school per day, have less homework, and have fewer exams.

So why do they outperform students from so many other countries; while seemingly putting in less work?

Finland hires only the best and most qualified teachers and utilizes close mentorship. Finland has top-notch compensation and working conditions for teachers. The career is considered a prestigious profession and to teach at ANY level a minimum of a Master’s degree is required.

There is also a rigorous selection process – only 10% of teacher applicants are accepted. In America, about 50% of teachers quit after the first 5 years, in Finland it is considered a life-long career. In Finland, there is an emphasis on how to learn and how to think — as opposed to learning facts.

They’re taught to be entrepreneurs of their own lives. Instead of standing passively on an education assembly line and being handed reams of facts and figures, they are thrown into rooms of bricks and asked to build castles.” – Shane Snow

We may not all be products of the Finland school systems — but we can still draw upon the take away which I find very monumental that Snow points out – especially now that we are adults in charge of our own destiny.

Snow empowers readers to seek for patterns, learn from mistakes of mentors and peers around us.

I could go on and on about the content in this brief but great book, I’m going to cut my review here, and simply suggest that you pick up this book the next chance you get and really delve into it.

The skills and philosophies of this book are easily transferable to the clinical and business side of dentistry.