Sam Walton: Made in America 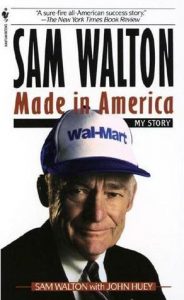 This is my first book review.  Those who know me, know that I’ve read hundreds of books.  During dental school I was reading approximately a book per week.  I credit books for the majority of my working knowledge and own an ever growing library.  My ‘Scoring’ system isn’t numerical – I don’t do traditional 3 stars, 1 star, 5 star. I’m giving out letter grades, just like in Dental School. Some books are great.  Some books are junk.

A book that isn’t junk is ‘Sam Walton Made in America.’  Sam Walton is one of the most overlooked prolific figures of the last 50 to 100 years.  This is his auto-biography. Walton is the creator of Walmart and Sam’s Club.  His family is one of the most wealthy families on the planet and Walmart is the most successful retail store in the world.  But, Walton himself was extremely humble – even at his peak of wealth continued to drive his old pickup truck and share hotel rooms during business trips with people sleeping on the floor to save on the cost of buying an extra room – even as a billionaire.

When a penny is lying out there on the street, how many people would go out there and pick it up? I bet I would. And I known Sam would too.” – Bud Walton (Brother of Sam)”

Walton was a meticulous fiend for detail and was feverish about seeking out any edge he could have over competing stores.  Walton would literally crawl on the floors of his competitors stores to understand them from the bottom to the top.  He would fly his personal jet through the skies seeking out the ‘next perfect home’ for a new Walmart.

Walton grew up meagerly and watched his family struggle to get by during his youth.  He began contributing to his household financially from the age of 7 years old; milking cows, selling magazine subscriptions, and raising and selling rabbits and pigeons.

I believe that Walton’s humble nature through his success originates from his bootstraps beginnings.  This is easy to relate to as a dentist, as many of us start from just a single small family dental office — Walton started with a small single convenience store – at the time called a ‘Ben Franklin’ store, it was a franchise.  As a franchisee he learned everything he could and went through a TON of failures.  But he knew his niche.  He had a clear and concise vision of what his future stores, separate from his franchise owner, would need to be.

Walton was 27 years old at the time he bought into the Ben Franklin retail store franchise.  Ben Franklin stores were basically your run of the mill corner store.  Walton began to experiment with the power of discounting as well as hone his ability to negotiate deals from supplies.  After 5 years, Walton had the #1 most profitable Ben Franklin store in the nation, and he was located in Newport, Arkansas.  Walton would find that his niche would end up being placing stores in areas which were rural, and then to completely monopolize those areas.

Walton spent years building the foundation of the store he owned…however, Walton did not own the real estate of this store.  His landlord elected not to re-new Walton’s 5-year lease, for any price, he wanted him out.  Walton was forcefully pushed out of his store, and the landlord gave Walton’s prized store to his own son. Walton had nothing to show for his venture, other than the bumps and lumps of experience.

It was a low point of my business life. I felt sick to my stomach. I couldn’t believe it was happening to me. It was really like a nightmare. I had build the best variety store in the whole region and worked hard in the community – done everything right – and now I was being kicked out of town. It didn’t seem fair.” – Sam Walton

Walton didn’t let the initial failings of having his store stolen from him impede his path.  He took the knowledge that he gained and relocated to Kansas.  This would be the home of Walton’s next venture, which would ultimately evolve into the modern Walmart.

Sam Walton was a voracious networker, making contacts with people more experienced than he was.  He was able to learn their strengths as well as learn their mistakes — which he himself was more easily able to avoid in his own pursuits.

Key Strategy:  Dominate a small market before attacking a large market. The original Walmart formula centered on dominating small towns that K-mart (their largest competitor) was not in. This allowed them to avoid competition in their grown and niche market dominance.